It's finally Friday, and that means it's time for the next party member introduction!

Now on to the next party member: Nephele, the theomechanist! 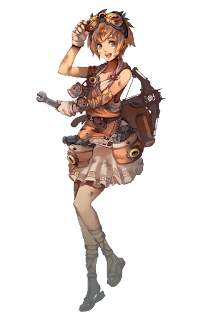 Prior to her adventuring career, Nephele was a temple priestess at a small temple of Apollo outside Athens. In addition to helping out with religious rites, Nephele's also in charge of keeping all of the temple machinery in tip-top shape. That is, when she's not tinkering on her own steam-powered gadgets.

In combat, Nephele sports a mini-pressurized boiler and her trusty steam bow:

Her steam bow can deal incredibly high single-target damage, especially when using her stored up steam pressure to hop up to high vantage points:

In addition to these basic abilities, Nephele builds up one unit of steam pressure each turn to power her unlockable skills. The first skill you'll get to use is called Depressurize. It uses up all of her pressure to push all adjacent characters up to 5 spaces:

Unless said characters hit a wall or fall off a cliff, that is. ;)

Check back in Monday, and I'll dig into a few of Nephele's other skills! (Part 2 is here!)

Also, you can check out the Diona intro from earlier in the week, as well as a series on Hellenica's other battle mechanics.

Remember to head over and wishlist Hellenica on steam and retweet our announcements on twitter! Thanks everyone.
Posted by Kurt at 5:18 PM