As Kurt mentioned in his last post, we were fortunate enough to spend this past weekend at PAX. We had a lot of fun there checking out different games and panels and even pulling aside a few unsuspecting attendees for usability tests (thanks, guys!). Particularly awesome was a Bioware panel we attended, where the developers largely eschewed the usual platitudes to give us some concrete details of writing techniques they used. I took notes on some of what they said and thought it would be neat to talk about how we arrived at some of the same ideas in the development of Hellenica.

1. “Create a rough outline for your world and story first before you create your characters. That way you can ensure that your characters are all people with stakes in the story.”

We got the order of this one right, but our reasoning was different. One of our big goals was thematic cohesion through the world, so once we had arrived at our primary themes we sought to build them into the different political forces of our story. Then once those were in place, we started building our characters: Nephele became emblematic of the burgeoning exuberance of the steam revolution, Brasidas represents the confusion of having societal progress erode your deeply-held traditions, etc. Since our characters are so firmly grounded in our story’s themes, they definitely have stakes in what's happening, but I wonder if maybe we're missing something by tying characters to grand ideas and not focusing as much on an individual’s goals or prejudices.


2. “Write characters first and then introduce romantic relationships later, otherwise it becomes too easy for a character to becomes ‘just the love interest’."

You can ask Kurt about this, but early in development I fought HARD to make sure Diona and Brasidas wouldn't end up in a relationship. I was really worried it would distract from Diona's character and undermine her independence. After listening to the Bioware panel, I now think it could be done (after we've had 100+ pages of dialogue to define the characters) but even if I wasn't scared of writing romance dialogue, our game time’s already stuffed to the gills with story, so I don't see us adding any more.


3. “A good moral choice is one where even after you've seen the immediate consequences, you don't know if you made the right call. One way you can create this is by having the player commit to doing something, but then once she learns more about the situation, have a party member ask her to do something else.”

An early tenant of our writers has been that [uncertainty + conflicting goals = moral choice], which is a more programmer-ish way of conveying the same idea. That being said, where Dragon Age intentionally strives for verisimilitude and shades of moral gray, Hellenica's choices tend to focus more on giving the player exploration options. Although, sometimes certain paths are intrinsically tied to a specific character or story arc, in which case we almost feel a responsibility to add some narrative counter-balance, so the player doesn't just feel railroaded down a specific path.


I have a few other notes, but those don't tie in as directly to what we're trying to do with Hellenica. I'll post them though, if people are interested. Also, if I can track down a youtube video of the panel, I'll be sure to post that too.
Posted by Victor Cepeda at 9:06 AM No comments:

Off to PAX South!

We're hopping in the dragonmobile this weekend to head up to the very first PAX South! (That's right, we'll be one of the few cars traveling north to reach the convention.) We don't have an official booth, but I'm hoping to get as many hands and eyes on Hellenica as I can manage in the two-day period.

To prepare, I've been polishing up one of the more unique levels in the game: the train ride to Thebes! I won't spoil the plot details, but suffice it to say that our party's in for a rather bumpy ride.

Unlike the combat stages in most tactics games, this particular stage is broken up into multiple parts (different train cars), and I'm really happy with how it turned out. Here are some shots of a few of the cars: 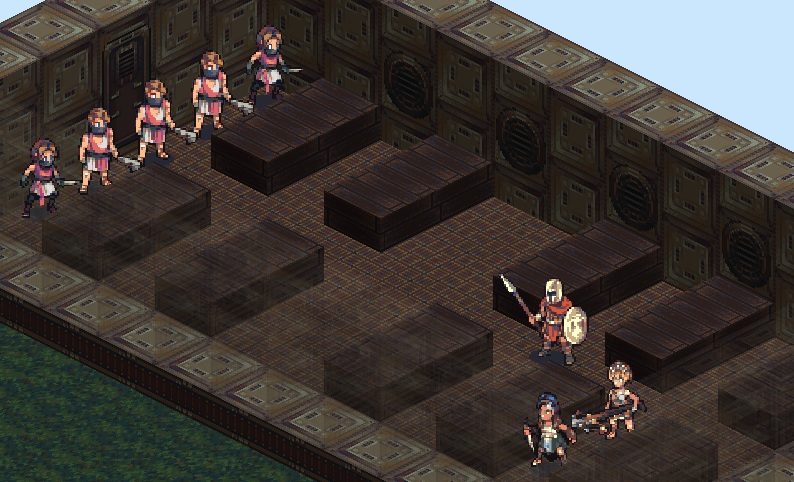 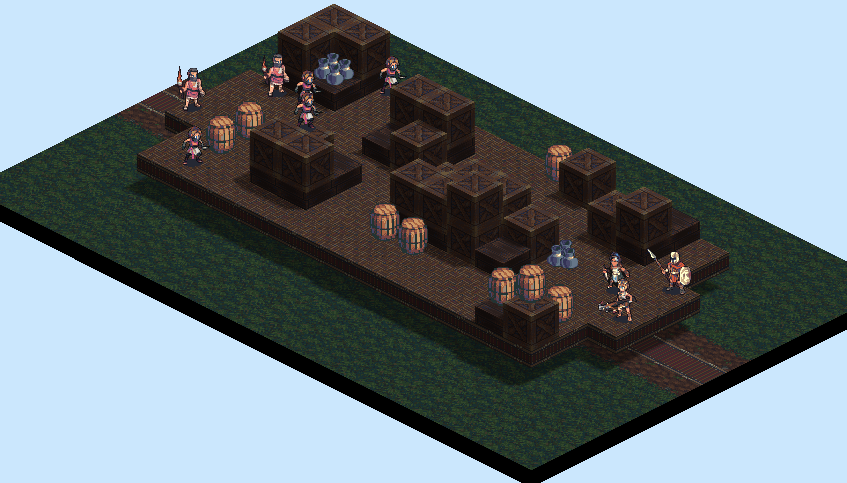 If you're going to be at PAX South this weekend, shoot us a note here or on twitter @thedragonloft! We'd be more than happy to show you the demo.
Posted by Kurt at 8:44 AM No comments:

A New Year in Sparta

We've done a variety of sundry tasks since returning from our holiday, but my great white whale so far has been the implementation of level 6's Sparta. I've mentioned before that the cumulative weight of all the player’s previous choices makes writing later scenes more difficult, and Sparta's no exception. First off, multiple characters have baggage tied to this location. Brasidas in particular has a checkered history the player might have uncovered hints about in her previous adventures.

Additionally, the party comes to Sparta to deliver a warning, but the exact details of that warning vary depending on what the party's learned. Our dialogue system is awesome for this sort of thing, allowing us to easily accent a conversation depending on what details the player has learned. I've additionally started using what I'm calling "general knowledge (GK)" variables which track how much a party knows about a topic (as opposed to checking against various specific events). These GK variables work well when that information is likely to be mentioned and referenced in various paths; for example, one such variable is checked in Sparta (and elsewhere) to see if the party has specific knowledge about the enemies’ weapons.

From a narrative standpoint, sh6_sparta is exciting because the player gets a big reveal of a certain clandestine order. Though they're peripherally (and furtively) involved in a few other social hubs the player could have visited, this is the first time you can stop and ask questions about their philosophy and motivations.

Next Week: Hopefully something with more pictures and less spoilers.
Posted by Victor Cepeda at 4:44 PM No comments: