Knowing is Half the Battle

One of the many challenges with game development is that you don’t always know what game you're making until you're halfway through. Sure you have an idea what you're going for, but once you start bumping up against technical and logical restraints, or just learning that your core experience isn't what you had hoped, plans start to change. Unfortunately, some of the foundation you've built is now obsolete or poorly suited to the new task. This is why a lot of game series don't get really great until a sequel or two; by that time around, devs have a much better idea what their systems need to do.

We're experiencing this phenomenon with Hellenica in a few ways, one of which is the problem of party knowledge influencing branching dialogue.

When we first started writing dialogue variants for specific paths the player had taken, we simply checked which social hub the player had visited at a specific level. The writer would know what story events had happened in that path and edit the dialogue accordingly. While this was effective, it began to get complicated when multiple paths would converge into similar dialogue.

With rumors, the complexity got worse. Not only would we need to account for multiple paths that could lead to the same dialogue, we would need to do so across the whole range of locations the rumor could occur in.

Our solution to this is to use what we're calling "knowledge details" to track important story information the party has learned and branching dialogue options off of these variables. It doesn't matter on which path the party learned the true nature of the mysterious shipments arriving in Sparta, if that variable is set, they know about it and will comment appropriately. This frees us from the need to track a web of paths as mentioned above. Unfortunately, over half the game has been written and implemented, so we're only retroactively using knowledge variables when it's critical. And even there, I'm scared I'll forget that some bit of knowledge should have been set in a social hub I implemented months ago, and a branch won’t play properly...

Ah, the joys of game development.
Posted by Victor Cepeda at 5:02 PM No comments:

This week I thought I'd follow up on Victor's intro to Crete with a post showing off the art. It's one of my favorite locations in the game, and I'm really happy with how the background painting came together.

Here's a quick description of the setting:
"The Minoan civilization collapsed for unknown reasons centuries ago, leaving only fog-covered ruins on the isle of Crete. Athens nominally claims Crete as its own, but rocky crags shrouded in fog and rumors of a curse keep them mostly absent from its shore.  As such, these ruins and their surrounding waters have become a harbor for disreputable vessels that would rather confront whatever curses the ruins hold than the Athenian navy." 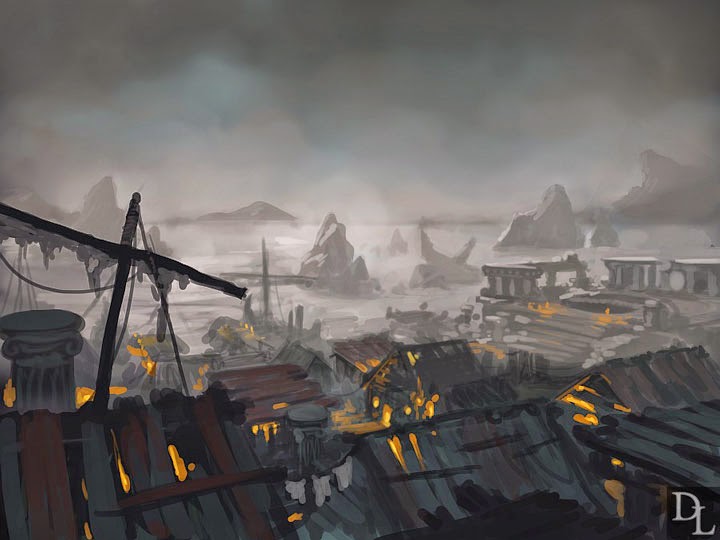 As with most of our requests, Daniel's first sketch of Crete was basically perfect. The mood is spot on, and even without the details in you can already make out many of Crete's characteristic features: derelict ships, crude shanties, and the ominous entrance to the Labyrinth in the background. 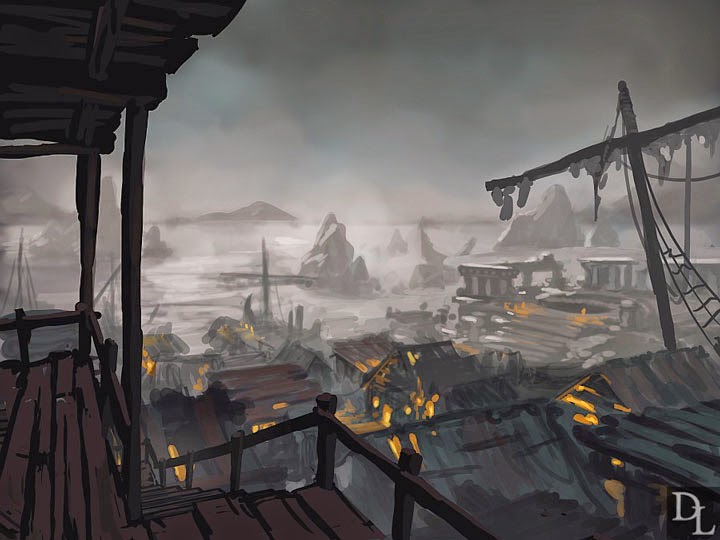 We changed up the composition a bit to provide a more viable vantage point for the party, but I insisted that we hang on to that ghost ship mast. Fortunately, Daniel's a swell guy and was happy to oblige. (I suppose we're also paying him to listen to us, but that's hardly relevant.) 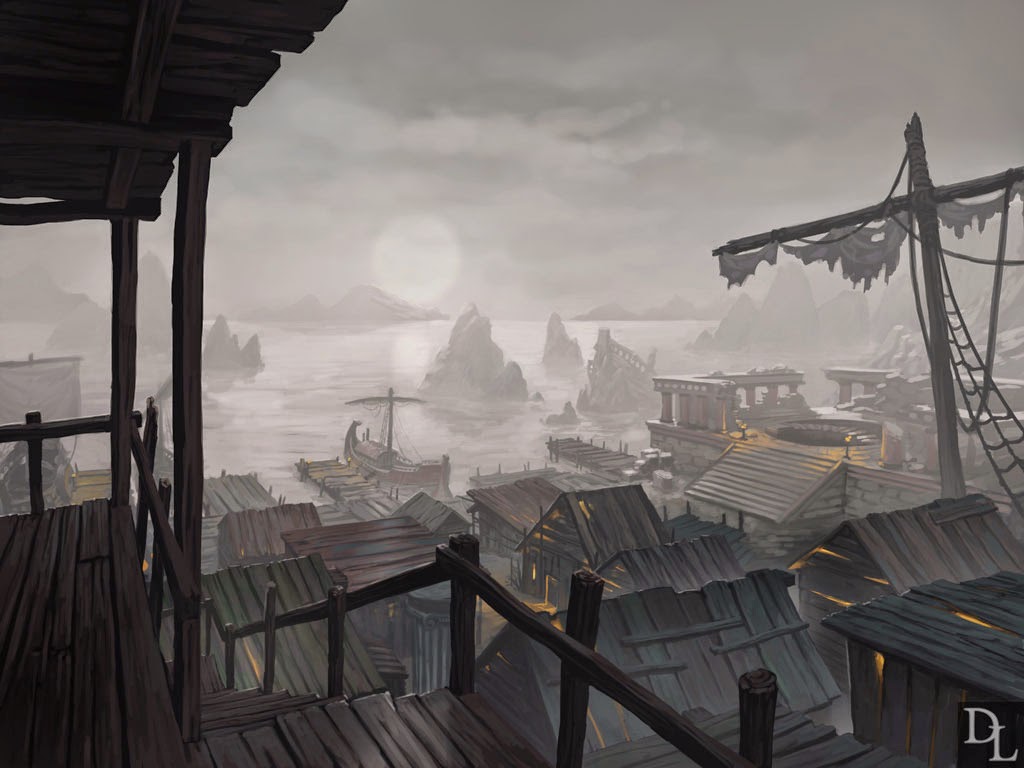 Here's the final revision of Crete that you'll visit in Hellenica. This location's a really fun one to play through, I wish I could post more than just the art!
Posted by Kurt at 3:17 AM No comments:

It's been an eventful week.

My south Texas apartment’s air conditioner broke, rendering my work space's temperature somewhere between "oven" and "hell". It’s finally fixed, though I’m still not sure how much the heat addled my brain (or my writing), let's see what my editors say...

Anyway this week I was focused on the pirate haven of Crete.
Most social hubs in Hellenica have their own unique quirks and restrictions we need to keep in mind when writing them, and Crete’s no exception.

Unlike the choose your own adventure books of my youth, where your choices will retroactively force the world to assume a different reality, we made the decision to keep Hellenica cohesive. The characters, motivations, and hidden plots are consistent throughout all playthroughs. Separate playthroughs will have the player exploring and manipulating different narrative threads, but in the end all those threads tie back to the same world about to be destroyed by the same evil.

While we really like the cohesive and interlocking feel this sort of structure gives multiple playthroughs, it creates a very complicated web of restrictions as we struggle to keep things consistent.

In the case of level 5 Crete, finding the right NPCs to populate the hub was a problem.

Given its status as a pirate hub, there's already a limited number of characters who would have legitimate reasons to hang out there. In the level 3 version of Crete, we solved this by including characters whose personas involve wandering Greece.

However, each of their character arcs had now taken them elsewhere. Additionally, the one unsavory persona who more-or-less permanently inhabits Crete might (depending on playthrough path) have reason to want the party dead. The list of potential conversationalists was looking pretty slim, and we were hesitant to add new characters this late in the story.

Eventually we came up with ways to relocate other NPCs to Crete. The first is a member of a widespread secret organization, and has liberty to show up at will and help the players when needed (plot glue!). The second was an Athenian Aristocrat (whose identity will remain secret). Why would such a person be hanging out in a pirate hub, you ask? Well the player's party is curious too, and that question helps drive the story in the social hub. Between these NPCs (and a few related conversations with unnamed pirates), Crete is filling out nicely and should be in game within a matter of days.
Posted by Victor Cepeda at 10:07 PM No comments:

No Greek epic is complete without a proper visit to the Oracle at Delphi, and we've remained faithful to tradition in Hellenica. Of course, whether you visit Delphi is ultimately up to you, but hey, if you insult Apollo by skipping over his temple on your journey, that's on you.

It was said that the Delphic Oracle was effectively the highest authority in ancient Greece. Men dominated most aspects of life, but when you needed divine advice on political controversy, military conflict, economic turmoil, even relationship issues, you asked the Oracle at Delphi.

For our version of the Oracle, we started from a fun theory about the source of the Oracle's inspiration: the volcanic fumes in her chamber! The gods work in mysterious ways. 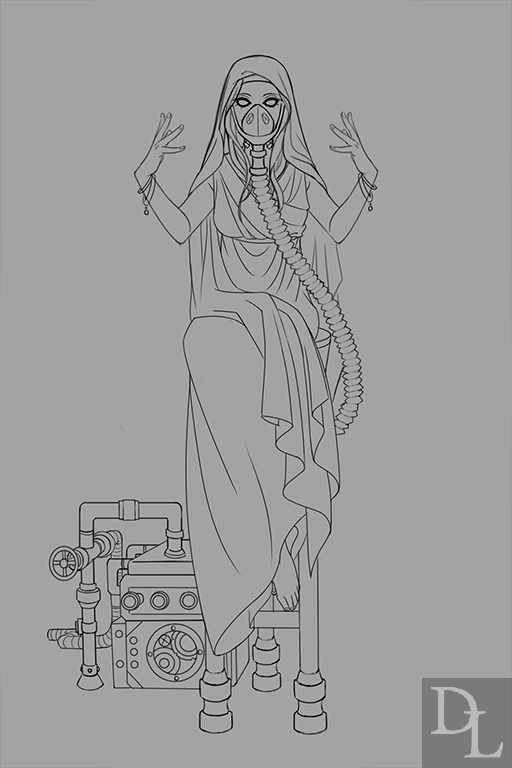 Compared to our other characters, we wanted to set the stage for the Oracle a bit more thoroughly. She's seated up high to play up the drama of the scene, and a steam-powered pump is chugging away to feed her inspiration straight from the source. Unfortunately, we weren't really feeling the jazz hands, and the tubing looked a little too F-15 fighter pilot, so we took another go at it. 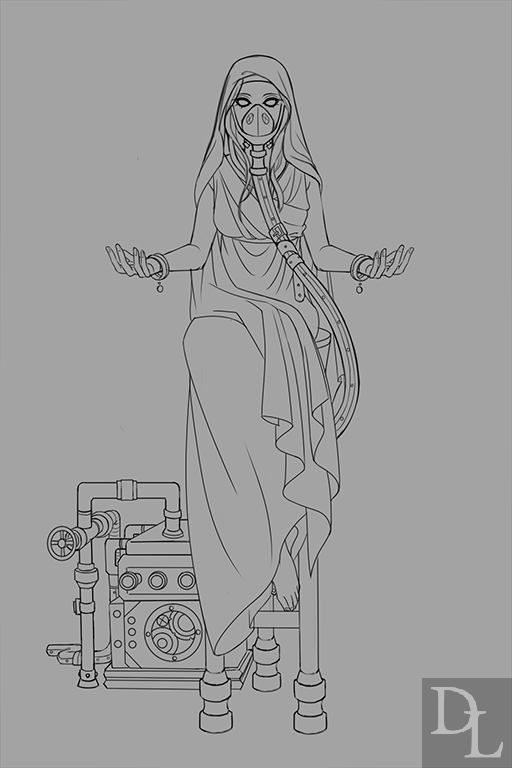 With those issues ironed out, we spent a bit of time figuring out what colors worked best for her. We originally went down the route you see on the left, but quickly realized she matched all of our Spartan characters. Who she hangs out with on the weekends is her own business, but for our purposes, we needed to avoid any possible confusion. The colored eyes were also starting to weird us out at this point, so we did some more experimenting. 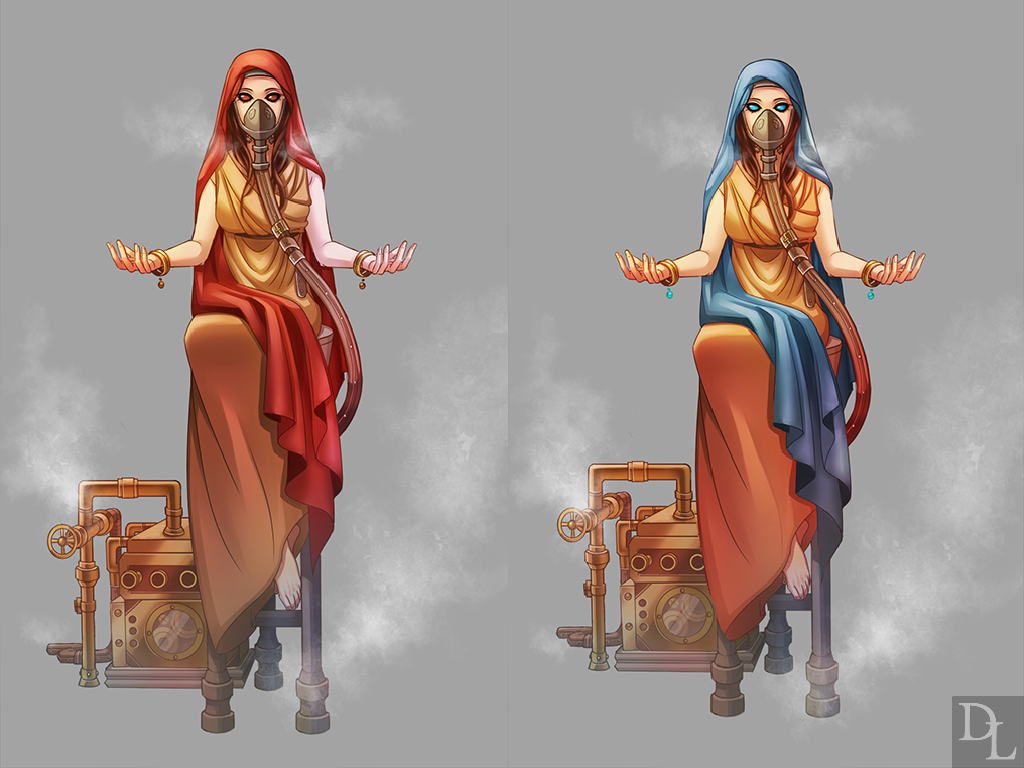 And that, dear readers, is how the Oracle at Delphi (in Hellenica) came to be! 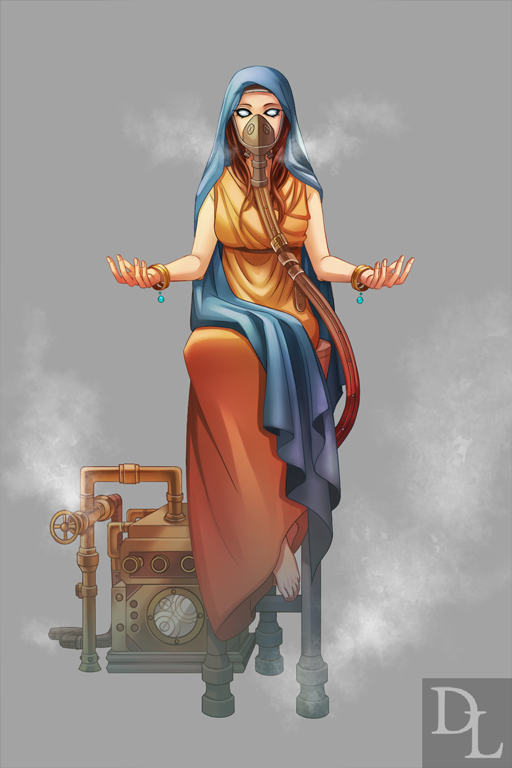