Oops! This is going up a little past the due date, but hopefully you'll forgive me. We got a little distracted by Rocket League tonight. ;)

Re-implementing the social hubs with the new UI was a big task that I had put off in favor of focusing on our critical path, but having it in place is pretty vital when we need to reference a story detail. Now that they're all hooked up, it also means playtesters can explore a bit more freely, which is a bonus. Expect another post this week with a playthrough video of the new experience.

Moving the customization screen into the combat path itself is something I'm really excited about. I always wondered why Final Fantasy Tactics let you position your troops in a precise manner before you had any idea what the encounter actually entailed. 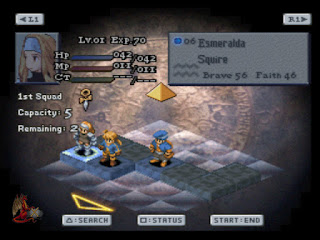 Is the enemy going to be on the left? In front? Behind? Are the first two squares on top of a cliff? You had no idea until you locked it in.

Now in Hellenica, you'll see the introduction cinematic play out that shows off the battlefield, highlights the threats you'll be facing, and explains the objectives. Only then will you choose what abilities you'd like to take with you into the fight. Hopefully this will set the player up for success.

As for this week, I'm planning on getting back into some level building later in the week, so expect some twitch streaming right here!
Posted by Kurt at 1:22 AM No comments:

Another Monday, another status update!

Nothing too crazy last week, but we're really excited about the new in-world UI around the actors. The health readouts and facing arrows solve two of the biggest complaints we've heard in playtests. 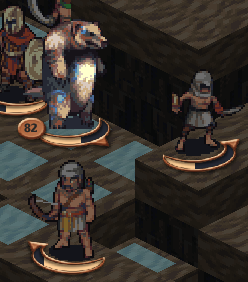 Also, it's always fun hooking up a new ability to see how it changes up the formula. Sky Shot bears some resemblance to abilities like Charge from Final Fantasy Tactics and Rain of Arrows from Banner Saga. Nephele fires a volley of bolts up into the air that target a small area on the battlefield. Then, at the end of the player's next turn, those bolts land and deal damage to any enemies in those locations. Lovely payout if you're able to predict your enemies' movements, or just move them into position yourself with a few pushes or tosses. ;)

This week we're still working towards getting the final UI elements in for the combat portion of the game. I'm also planning on tackling some long-standing bugs and design improvements as we polish things up on our way to finishing the critical path.
Posted by Kurt at 9:55 PM No comments:


Wow, sorry lovely readers. You have suffered some serious neglect, and for that I apologize!

Based on the previous post, it must look like the end of days for Hellenica. In fact, that couldn't be farther from the truth.  We've made a ton of progress over the last two months, we've just been doing it very, very quietly (disregarding all of the chortling and singing that takes place in the office).

From here on out, I'm going to attempt to put up a quick post on Mondays detailing what we did the previous week and providing some hints about developments in the upcoming week. Then every so often I will try to piece together a more in-depth look into a specific topic. I know they're more interesting to read, but they also take up quite a bit of precious development time so, you know, trade-offs.

What we've been up to:
- New social hub UI (this deserves its own post later)
- New sound effects to support social hub UI

- New social hub ambient and background music tracks (check one out here and be sure to loop it!)
- New map UI (note to Kurt: one more separate blog post)

- Ported the dialogue UI from NGUI to the new Unity UI

- New dialogue authoring tool. Should hopefully make it easier for people other than Victor to generate complex, branching dialogues.

- New combat features:
- Neutral actors. Currently using this for destructible obstacles.
- Moving platforms. Think steam-powered conveyor belts, elevators, and maybe some more mystical devices that make the environments more dynamic.
- 3D game positions. This might sound a little weird since our game is 3D, and it probably deserves its own explanatory post in the future. For now, just know that it's going to let us do some cool new things, but it'll take some time to iron out all of the wrinkles.
- New playable characters! Unfortunately, they're still a secret.
- Status effects. Root, stun, taunt, etc.
- Cinematics! The new cinematics editor is hooked up and we've got cinematics built for our critical path.
- A whole slew of new party abilities and a progression system to unlock them. (My favorite new ability is code-named Beardozer, and it is a thing to behold.)
- Some new enemy abilities
- Smarter camera work during turn execution.
- More intentional backgrounds to help establish mood.
- Redesign of the various UI pieces in the combat portion of the game. These will start popping in as I get time to integrate them.
- A bunch of new combat levels (you'll see this one a lot)
- Improvements to the level editor
- AI perf improvements
- A bunch of new story dialogue

Whew! Usually these will be much, much shorter, but hopefully you're convinced that Hellenica is still alive and kicking. I'll try to get some more detailed posts going every few weeks to explore some of the more interesting features I listed.