It's been about a month since my last update here, and you're probably wondering what we've been up to!

Our focus has been on bringing the player experience closer to final polish, which means we've now got a good chunk of new visual stuff that I can actually show off!

We've also finished creating all of the city location music and the narrative outlines for all the possible endings! Hopefully we'll be wrapping up the final script in the coming weeks.

Here's a quick peek at some of the party skill icons before they get stamped into brass buttons for our UI: 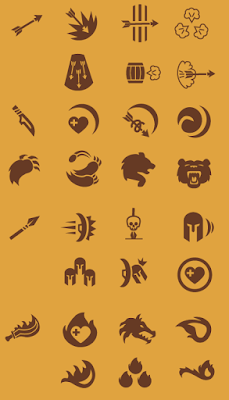 Can you tell which party members correspond to which icons? We're curious to see how closely you can guess what each skill does from the icon alone!

Here's a shot of the objectives screen: 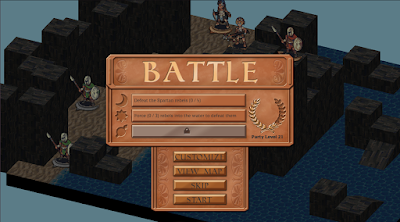 The current design calls for each combat level to have three objectives. The first is the main objective, to be announced with great gusto: "Defeat all of the enemies", "Escape the bad place", etc. Completing this objective will allow you to progress further in the story. You'll also gain some favor from the gods, which can be used to upgrade your party's skills and impress your friends.

The second objective is a bonus objective that's meant to help teach the player a tactic they may not have considered. Completing this objective should hopefully make the level easier for those that are struggling, while also providing some bonus favor to spend towards skill upgrades. Sometimes this objective may call for a specific skill that the player hasn't unlocked yet, hinting that they should replay it after they've unlocked that skill.

Each objective is loosely associated with a Greek god or goddess. Since you're on a quest from Artemis, hers is the main objective (the moon). Apollo provides the second, more teaching-oriented objective (the sun). The final challenge objective (the shield and spear) is a challenge from Ares, the god of war himself.

I'll be doing some streaming later in the week to show off some of the other improvements we've made to the visual/aural feedback. Once I get a recording made I'll be plopping it on here for you guys to watch at your leisure. Stay tuned!
Posted by Kurt at 3:01 AM No comments: