(Psst! Check out Part 1 before diving into this post!)

So, you're up to speed on Part 1, and now you're thinking to yourself:

"Hmm, so pushing enemies to expose their flanks or tossing an ally out of danger seems helpful, but I want to do some damage..."

Here's the simple approach: send them tumbling for fall damage!

Characters will take damage if they fall from a height greater than three blocks. So with a cleverly-executed push or toss, you can make the environment do damage for you.

Things get even more interesting when you push a barrel or toss an ally onto an enemy. We call this a bounce. Friend and foe alike will take bounce damage if they're on the receiving end, though the character doing the bouncing won't.

In general, characters with heavier defenses are heavier, and that means more bounce damage when they land on someone's head.

Once a character starts bouncing, they will keep bouncing until they land on an empty space. As you might imagine, this can lead to some pretty impactful turns...

Next week, I'll post the final bit of fun: hazards and traps. Check back then! (Part 3 is now available!)
Posted by Kurt at 10:00 AM No comments:

Hellenica has all of the expected trappings of a SRPG/Tactics experience when it comes to combat mechanics: facing modifiers, height bonuses, buffs and debuffs, heal spells, and more. On top of that, we've also included a number of ways to manipulate the battlefield.

Here's a gif showing some push examples using Diona's Maul skill. Maul deals a decent amount of damage and pushes the target up to 3 spaces:

You can see that Diona will push targets up or down as long as the incline's not too steep.

If the target hits a part of the environment that's 2+ blocks tall or runs into another target, they will cause a collision! This will deal some damage to the target in the case of the wall collision, or split that damage equally between the pushed target and the collision target.

In general, you can use all of Hellenica's manipulation skills on any target: enemies, allies, or obstacles like barrels and pots. Your allies won't be damaged by the damage portion of the skill, but they may still take collision or fall damage, so be careful!

Another type of manipulation skill is a toss. Here's Makarios making good use of his toss to eject a pirate:

Tosses differ from pushes in that they can pass over other targets and environment obstacles, assuming they aren't too tall. Although they don't typically do damage directly, they can be used to clear paths, set up clusters of enemies for AoE attacks, or send an enemy onto an environmental hazard as seen above.

Next time I'll go into some of the fun ways these skills can be used to damage and defeat your opponents. Stay tuned!

It's been a long road folks, but we're finally close. Today I'm happy to announce that Hellenica has a release date! We'll be pushing the big red button on January 23rd, 2017!

Please check out our Steam page and wishlist/follow the game so you're reminded when it is released.

If you're not a Steam person, we're also going to be releasing on itch.io down the line.

Great news, everyone! Hellenica was Greenlit early this morning!

Thanks to everyone that voted and helped us raise the call for support. We really appreciate it!

We also had some help from smaller games journalists across the web. Check out some of their write-ups:


We even got picked up by some international enthusiasts:

IndieGames.com included us in their trailer round-up, too! Somehow we weren't the only game that featured ancient Greece or involved a mechanized, axe-wielding robot.

With that out of the way, it's just the game launch to think about at this point. Back to work!

Hellenica is on Steam Greenlight!

Good news! We pushed the big green button, and now the future of Hellenica is in your hands, dear readers.

Head over here (http://steamcommunity.com/sharedfiles/filedetails/?id=763801312) and vote yes to help us gain access to the biggest digital video game marketplace!

Also, please tweet/email/shout from the highest perch in your town or city about this as well, as we can use all the help we can get. 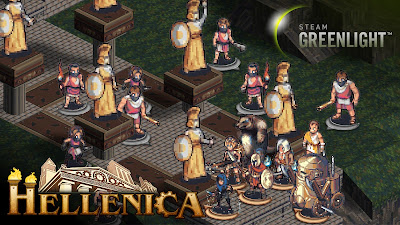 I'll get a more content-oriented post up next time, stay tuned!
Posted by Kurt at 11:13 AM No comments:

Hey everybody, it's been a while! I've been swamped, and Hellenica doesn't even have any swamp tile sets. Curious...

Last week I decided it was finally time to make ourselves presentable. We're still technically pre-alpha (the to-do list is getting shorter!), but our game has been polished enough for general consumption for several months now. I was keen on submitting Hellenica for an upcoming game conference, so I took the opportunity to sit down and tackle some marketing assets.

As our worthy reader, you get to reap the rewards of my labor in the form of delicious URLs. Have at it:

First, check out our shiny new trailer, and please perform every conceivable social media interaction with it.

Then, hop over to our Hellenica site. I'm using a Made with Unity site as a temporary landing page for Hellenica until I'm able to get something running on our side.

Tell us what you think about the trailer and other info. We've still got some time to improve things before we launch.

We're getting close folks!
Posted by Kurt at 3:27 AM 3 comments:

Building the world of Hellenica

Hey everybody, it's been a while!

Lately I've been living inside our homebrew level editor, putting together the huge number of combat environments that make up Hellenica's world. Obviously it would be rather selfish to keep all of the fun to myself, so here we are. Let's go on a journey of creation!

First stop: the end! What? Here's what a finished level looks like in the editor in full, indecipherable, debug glory: 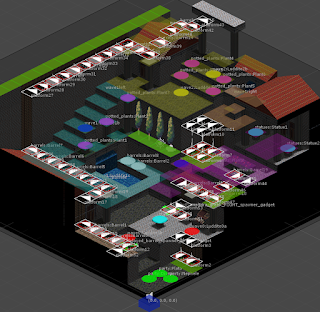 Well, that's not helpful. What say we break this down a bit?

Here's a shot of where things usually start: the level geometry. 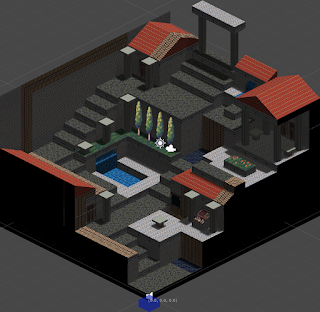 Ok, I lied. I typically start in a notebook, but this comes immediately after!

If you've ever built a tower out of legos, you have the requisite skills to build a Hellenica level. That little blue block near the bottom is the cursor, and I move it wherever I need to place a new piece. Most of the time that piece is a rectangular block, but sometimes I bring out more specialized pieces (see the roofs and columns).

Each piece has a texture assigned to each of its faces. When I drop a new piece in, its sides are all set to the same texture (mostly true). In cases where that's no good, I can also paint individual faces using the mouse. Here, I wrote you a message: 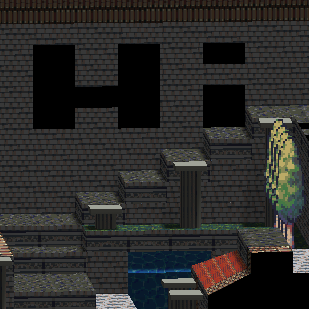 Instead of picking a color from a palette like an artist would usually do, I pick a whole texture. Call me greedy. Here's a sample of my palette: 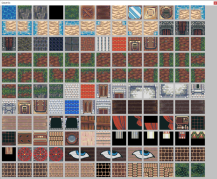 One neat addition we're making to the genre is moving platforms; think elevators, conveyor belts, and magical... platforms. After the player's actions resolve, all the platforms will move a step (which means different things for different types of platforms).

Coupled with Hellenica's repositioning abilities, this opens up opportunities for some exciting new decisions. Do you send your ranged attacker up a lift for a better vantage point at the risk of separating her from the party? Should you push a tough enemy onto a moving conveyor belt to postpone dealing with her instead of focusing your damage on her?

Athens has gone through a serious transformation since the steam revolution, and most levels in the city will feature steam-powered elevators and conveyor belts throughout. This level has a couple elevators and two conveyor belts, one of which wraps around the entire left side. 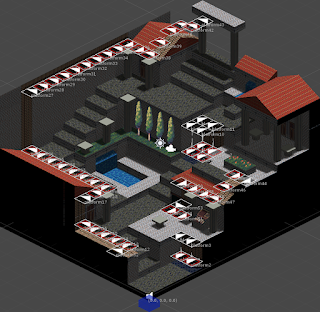 The squares drawn in the editor are actually just the 'slots' for the platforms. Each platform individually represents a single space in the level, and they move from slot to slot. Squares with a red highlight will start with a platform.

The white arrows indicate the orientation a platform will assume when it enters a slot. The texture we use for the tops of platforms indicates directionality so that a player can quickly grasp how the platforms will be moving in the future. This is a huge help, especially in some of the later levels. ;)

Once the level layout is fairly locked down, I start dropping in the actors that will populate the scene. 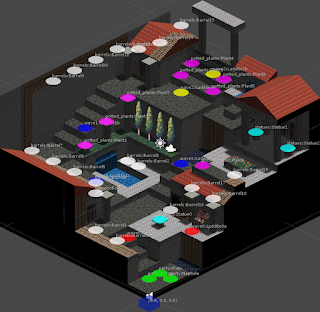 Different actor 'groups' are represented by different colors. Typically, these are groups like 'party', 'barrels', 'bad guys'. Sometimes extra groups are defined for special cinematic reveals or triggering logic. More on that later!

Oftentimes, there will be special level logic associated with certain positions. In Hellenica, I'm calling these gadgets. There are two in this level: 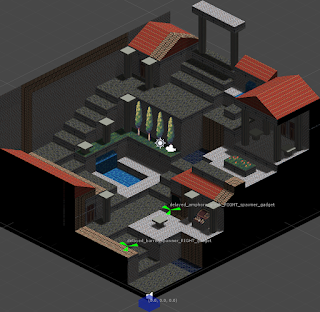 These guys spawn barrels and amphoras to keep the moving conveyor belts populated. In other levels, gadgets are used to place hot steam pipes that cause damage, magical traps that probably also cause damage, or friendly abilities that improve your combat effectiveness.

We're most of the way there now, but first we have to make sure the player doesn't cause us any trouble.

By default, the top of every piece is a visitable space for an actor. Unfortunately, trees don't like it when actors stand inside them, something about personal space. So, to avoid complaints I mark certain spaces as untraversable: 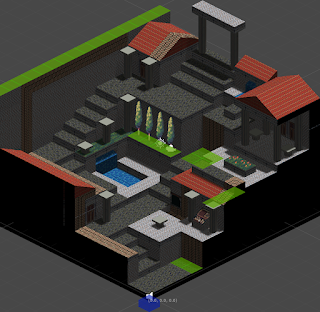 In this case, I don't want people walking underneath the elevators or disturbing the trees. Pesky Nephele also likes to vault onto the outer walls, which is probably not Icarus-approved, so that's a no-no.

Ok, it's on to trigger volumes! 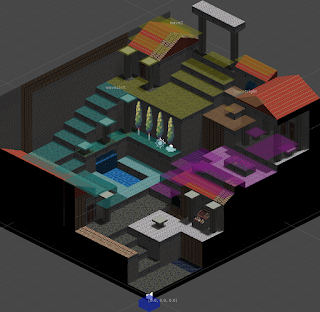 On some levels, I don't want all of the enemies to charge at the player's party right away. Everything in moderation, right?

By marking out certain areas, I can link the activation of certain actor groups to the movement of the player's actors. In this way, the player can (hopefully) indicate that she is ready for a fight by moving close to the enemies. (Hopefully.)

Not so bad, was it? Here's a shot of the final product: 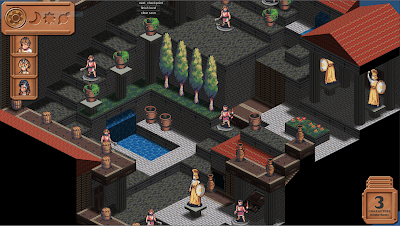 (This is an early level, so I don't feel too bad spoiling it for the faithful. Forgive me!)

Truthfully, my process is nowhere near as linear as I've laid it out here. As with any creative endeavor, large portions of time are usually spent wandering the harrowing depths of uncertainty. Lots of experimenting, lots of failing, but hopefully in the end I come up with something great. Having good tools certainly helps.

Hope you enjoyed this write-up! Let me know if there's anything else you'd like more info on.
Posted by Kurt at 1:26 PM No comments:

Hey everyone, I think we're probably overdue for a sign of life. We're still pushing towards launch, and I've got some fun new art to show for it.

We're closing in on being art complete in the combat department. Here's an example of some new spell effects Valery put together for an unannounced enemy:

We're also starting to pixelize some of the characters that are only involved in story moments. You can see a few here, as well as some familiar faces.

The latest thing I've been working on is designing the title screen and intro process. The plan is to give the player a quiet moment with her party as they camp for an evening during their quest. The scene will also be a reflection of your current location and make-up of your party as you browse your save files.

Each party member is going to have a custom animation as they rest around the campfire. Here's the first pass at Brasidas preparing his latest victim: