Hellenica launches in one week! Tell your friends on Twitter and wishlist the game on Steam!

And since it's Monday, here's the next character intro: Scylax, the Wandering Magian! Scylax is an expert swordsman traveling the world on a quest to find the True Fire. 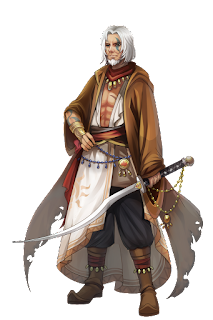 His adventures have brought him experience, wisdom, and even a powerful weapon, but if you've ever played any role-playing games, you already knew that.

All of Scylax's skills, including his basic sword attack, deal Magic damage, which is doubly effective against Heavy defense types.

In addition to his sword, he also controls powerful fire magic thanks to his training as a Magian. Cauterize is a starting skill that can be used to damage an enemy or heal an ally at range.

Anytime Scylax uses one of his skills he gains a level of Intensity, his passive skill. These are represented by tiny flames hovering around him.

Once he reaches level three, his flames will turn blue, and his next skill will be empowered. An empowered skill is much stronger than the normal version, often dealing more damage, affecting a larger area, or even having a new unique effect.

An empowered cauterize, for example, has its damage and healing scaled up two-fold, and it affects an area instead of a single target!

There are few things sweeter than a 5-target blue cauterize.

On Wednesday I'll show off some of Scylax's unlockable skills and their blue-flame variants. Come back then! (Part 2 is now live!)