Just twelve days until Hellenica's launch, which means we're prepping our togas and olive wreaths for the celebration. Help support our launch by wishlisting us on our Steam page and retweeting our updates on Twitter!

It's wednesday, which means it's time for the next party member introduction. Meet Brasidas, an exiled Spartan on a quest to prove his innocence and redeem his honor. 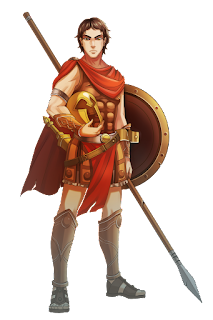 Brasidas is a veteran Spartan warrior, which means he knows how to handle himself on the battlefield. Accustomed to fighting alongside his armored brethren, he excels in a tight vanguard of his allies.

Brasidas has a unique passive skill called Protector that allows him to split any damage received by an adjacent ally. Since Brasidas has the Heavy defense type, his share of the damage will also be reduced by half.

This is a great way to keep squishy allies in the fight when they are threatened, but be wary of area of effect attacks that might be used against you!

His basic attack is a spear jab, which differs from other melee attacks in that it can strike diagonally or pierce up to two spaces in a straight line.

His final starting skill is called Shield Bash. This hybrid offensive and defensive skill deals moderate damage and pushes the target one space. It also applies a one-turn debuff that reduces the target's damage by half.

Like all repositioning skills in Hellenica, if Shield Bash is used on an ally, no damage or debuff will be applied. This means it's safe to use on your allies strategically without any penalties.

Friday I'll show off some of Brasidas' unlockable skills so check back then! (Part 2 is up!) And remember to check us out on Steam and Twitter!
Posted by Kurt at 4:51 PM