I'm no expert on the Mediterranean, but working on this game has certainly brought me closer. (Victor's another story; there's no doubt in my mind that he could rewrite half of the Wikipedia articles concerning ancient Greece at this point.) In Hellenica, your party of adventurers will trek to well-known locations like Athens, Sparta, and even a few mythical stops like the Isle of Circe, if you so choose.

One of the first locations you'll be able to visit is Corinth, a grim melding of steampunk fiction and Greek tragedy. Here's a brief run-down of the city and its recent history:

"Once a luxurious city second only to Athens in prestige and naval power, Corinth was devastated by Poseidon for its hubris in building an "unsinkable" ship. In addition to being struck by a tsunami, the city is ravaged by never-ending storms that ensure the flooded city cannot be rebuilt. A few former citizens still call the city home, living mostly in the ruins of a temple to Aphrodite, doing what they can to maintain it."

Victor's great at putting together these little snippets to establish the vision for the world. With this description in mind, he set out to gather relevant reference images: dilapidated, ancient cities, buildings overgrown with flora, and settlements flooded beyond habitation. After a bit of pruning, we let our talented artist, Daniel Thomas, run with it.

Daniel tried out a few different color palettes to help us explore different feelings for the scene. We ultimately thought that the greener hues created an unintentional sense of toxicity, so we went for the blue version. This specific hue of blue also evokes a sense of the supernatural for me, which I appreciated having for this ghost town. 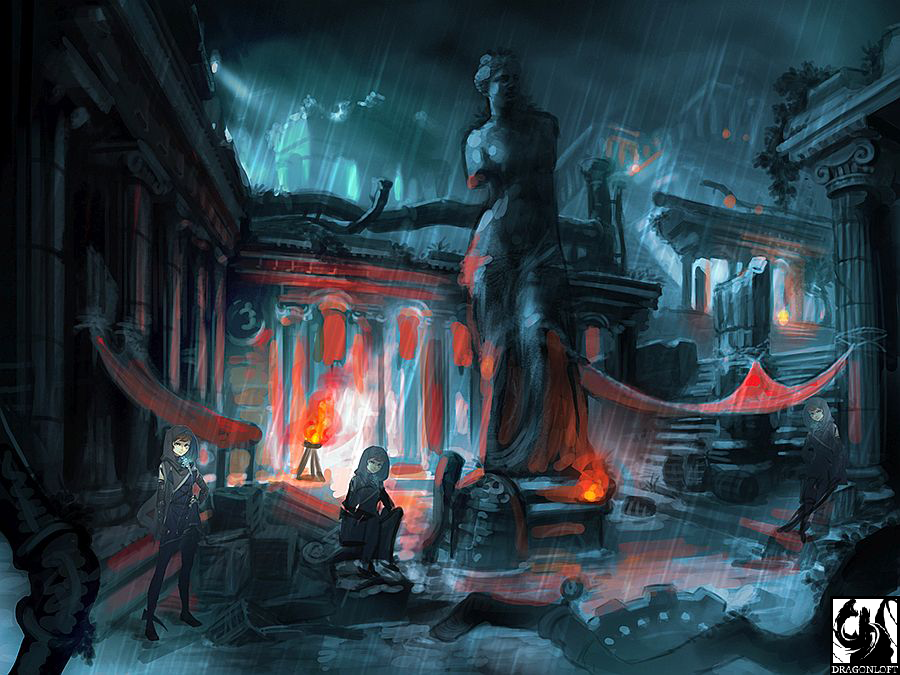 We also played around a bit with placing characters in the scene here to see how well the two styles meshed. I think the preliminary trial looks promising, but we're still unsure if this is the right direction for us to take. Here's the final image after Daniel spent a bit more time cleaning it up and addressing a few minor quibbles from us.

As with all of the art in our game, we strive to recreate ancient Greek forms and then dress them up with steampunk details. In this case, circumstances preclude an abundance of steampunk goodness (thanks Poseidon!), but you can still make out some of the infrastructure left around from the integration of steam technology.

So readers, where in ancient Greece would you like to visit? Maybe we can take you there in the next environment update!
Posted by Kurt at 10:28 PM