Recently, I've been reworking the UI for the tactics portion of Hellenica.

My initial prototype of the tactical planning interface suffered from a classic game design mistake: granting the player too much freedom. I had wanted the planning interface to be very powerful. At any point, the player could modify any character's position, use and retarget any abilities, and even step backward and forward in time to reevaluate the side effects. As changes were made by the player, the game board would take care of updating everything correctly to stay true to the game rules.

Since I designed it, I knew how everything worked, so for me it was great. I was an expert user. Once it was in the hands of other players, however, the failings were immediately obvious.

The flexibility ultimately meant that there was no structure to the planning. "Do whatever you like, whenever you like" became "I have no idea what I should be doing right now." Eventually, players progressed through clumsy experimentation, though in a playthrough several levels long, this only led to a very shallow understanding of the planning functionality.

It also meant that players weren't playing most optimally, because they didn't always know if they could still attack or they could have moved last turn. Because I had given the player so much freedom, I expected them to just play around during planning. In this way, they could learn what they could and could not do that turn, so explicit feedback in the UI wasn't as necessary. Clearly, it was necessary, as players needed some level of feedback to reach the stage of mastery at which they're comfortable just playing around.

So, what did I change?

1) Imposed structure: force the player to always assign an action to each party member
The planning flow won't progress until each and every character is assigned an action. If the player doesn't want a character to use an ability or they're unable to take an action for some other reason, they can always use the Orient ability to set their facing.

2) Internal consistency: explicitly visualize all currently available options in the same way
Everything a player can do takes the form of a character ability. Previously, movement was performed by targeting a tile without any ability selected, creating a confusing, implicit state. Now, the player must select the Move ability and choose their target like any other character ability.

These were the two big deltas. Aside from this, I also worked with the goals of designing something that affords simple, touch-based controls that can be extended to a mouse and keyboard and keeping the UI as minimal as possible to reduce screen clutter.  (Note that the art is still just placeholder, and the icons are used with permission from here.)

Let me know what you think! 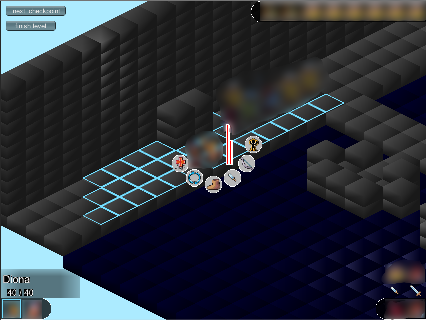