The Airship at the Center of the (story) Maelstrom (part 1)

From pretty early on we decided we wanted to use the same physical setting for multiple social hub stops. This was partially motivated by the cost of building social hubs, but much more significantly from playing JRPGs like Radiant Historia and Persona 4 and seeing how much they re-visited similar areas and how it helped the game feel cohesive. Ultimately, while there are hundreds of unique story paths through Hellenica, they all exist in the same world, so it makes sense to have some recurring locations.

That's not to say the social hub experience is the same. The majority of a hub's dialogue is specifically addressed to the current story points, and the dialogue that can be shared is mostly only flavor details or character introductions.

Additionally, as you can see from the story tree in this post, story paths will reconverge on social hubs and we have to use custom dialogue to make the narrative flow smoothly from what was previously happening.

In one respect, the airship scene is a great tool for managing this sort of story flow because it's not fixed in a geographic location. It can show up anywhere! It can take the players anywhere! But the downside is that since so many disparate paths end up flowing through the airship Scene, its dialogue has gotten labyrinthine. In social hub layers 4 and 5, the airship scene can be entered from 6 different paths, and exited to 5 different ones.

The problem is compounded because in some paths (not all!) the airship scene is where the final party member, Scylax, joins. Of course, the airship isn't the only point where Scylax can join the party, there are 6(!) different situations where he can encounter the party and decide to join. Naturally, there's a bunch of custom dialogue for all of these, but there also needs to be significant shared portions so our writers have some common narrative ground to build on. The end result is that a 7000+ word "Scylax joining" web needed to be at least partially integrated with all the airship dialogue. 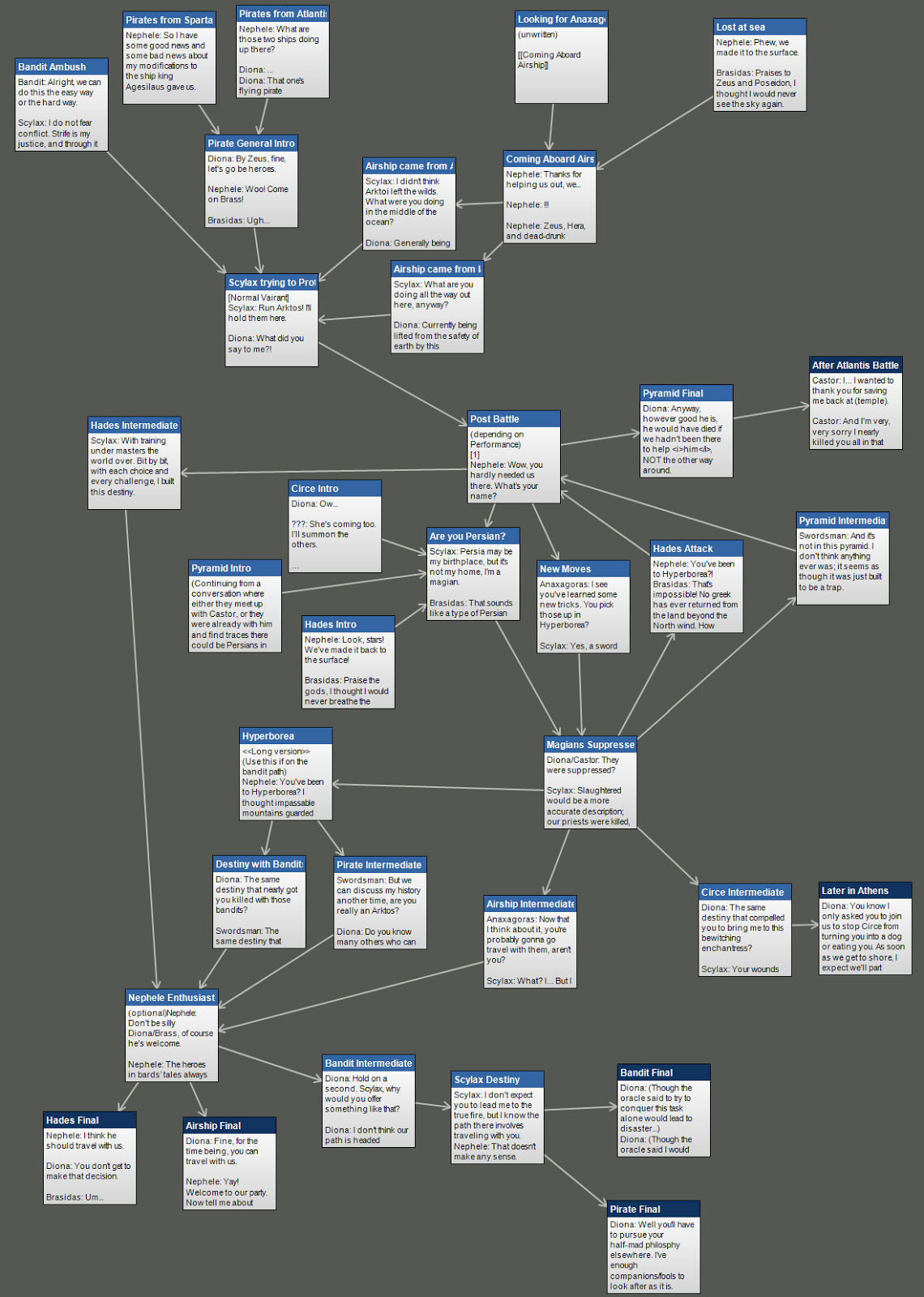 
And for additional fun, the NPC Nyx could maybe(but not necessarily!) be accompanying the party on one of the incoming paths.

Can our heroes find a way out of this dialogue maze? Tune in next week to find out!
Posted by Victor Cepeda at 9:56 AM