Howdy folks. Aside from some technical difficulties this week, I've been busy designing and iterating gameplay lately, tweaking hero abilities, level layouts, and enemy stats. Once these are all feeling good, I can be confident about moving forward with final combat art assets, and then we can ship this thing!

Now that we're getting closer to the finish line, we finally moved forward with a couple of the remaining character portraits we required. I don't feel too bad spoiling this one, as he shows up very early on in the game.

This is Sisyphus, one of the early big baddies you'll encounter throughout the world of Hellenica.

For the unacquainted, Sisyphus was a dastardly king sentenced to eternal torment by the gods for his deceitful, sometimes disgusting deeds. As punishment, Sisyphus was required to push a boulder up an impossible slope, endlessly stuck in a loop as the boulder always rolled back down before reaching the summit.

In Hellenica, Sisyphus has found a way to finally crest his impossible obstacle thanks to some supernatural assistance. However, his curse is not entirely broken, as he is still eternally burdened with the remains of the boulder.

In typical villain fashion, he has converted the source of his torment into a weapon, which he will happily use to defeat your party if they get in his way. Coupled with some new supernatural powers related to his curiously transformed legs, he is a force to be reckoned with.

The original sketch YDY put together was pretty spot on. The hair and face communicated the frenzied craze that we expected of someone previously mired in eternal, divine torment. His brute strength developed over years of continuous labor was obvious. His supernatural aspects are tricky to talk about in detail here without spoiling the story, but we were shooting for a craggy, ancient forest vibe. I think it works pretty well.

After some tweaks to the chains, we moved on to coloring. The first pass was good, but we felt there wasn't enough contrast between the leather bands and the boulder. Switching over to the green of the cloth also reduced some complexity which we thought helped to tie things together. 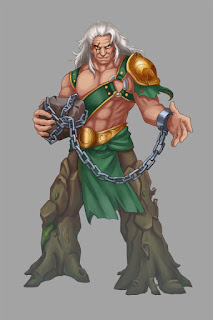 Let us know what you think of Sisyphus in the comments!
Posted by Kurt at 6:15 PM