It's now week two of post-PAX South life, and we're back into the swing of things. I'm currently in the middle of tweaking combat and building new levels, so it seemed like a good opportunity for an art update!

This week's travel destination is Rhodes, an elevated island city surrounded by a great wall on one side and staggering elevated docks on the other. Led by the so-called Mechanist-King Evagoras, the island nation is known for its theomechanical marvels as well as its generosity towards its allies and those in need.

We actually began work on Rhodes before Daniel, our environment artist, started working with us. At the time, we were still searching for the right partner, and we decided to give Collateral Damage Studios a trial run with Rhodes.

To start off, we wanted to work out the important elements unique to Rhodes. This meant figuring out how the steam-powered ship lift worked and what the Colossus of Rhodes may have looked like. We also knew we'd need to include some other elements for story reasons, so we tackled those as well. This exploratory part of the process is always my favorite.

A couple of the lifts relied on some questionable physics, so we decided on the rightmost implementation. In general, we were pleased with most variations of the other elements, though we really liked the mechanical solar system installation on the observatory.

With some more concrete details in mind for these elements, we started thinking about the composition of the scene. 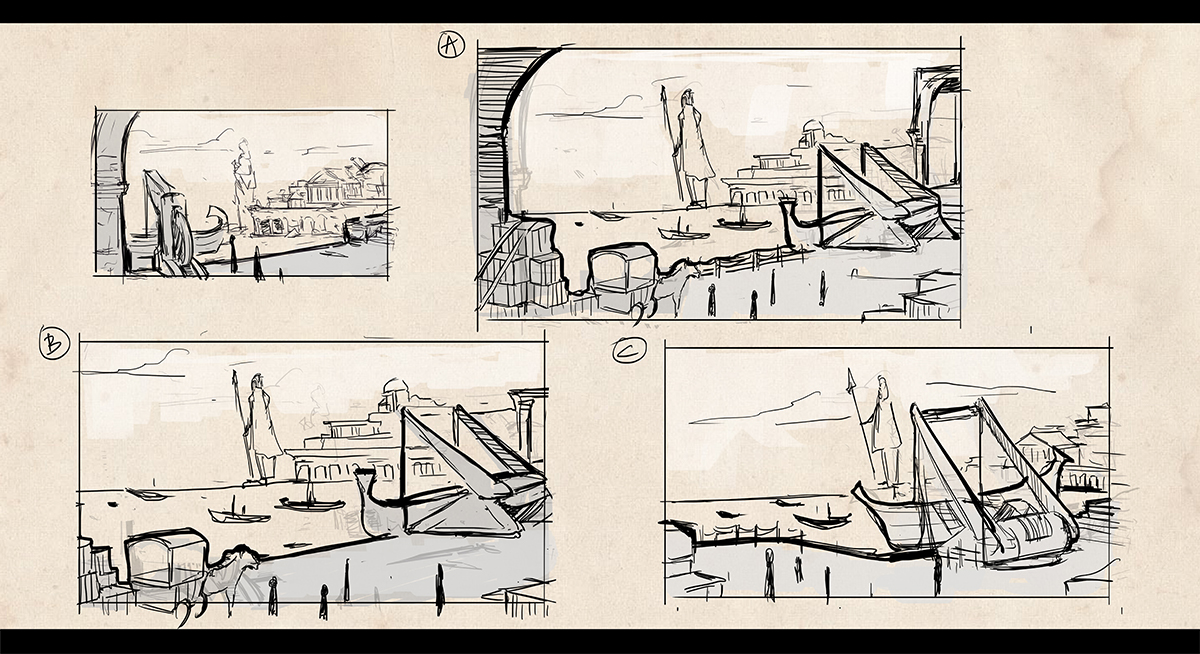 We knew we wanted a dramatic view of the harbor that showcased the Colossus as well as the elevated docks. The first option actually worked the best for us, as it provided a nice vantage point from which to view the cityscape in the background. After a little more playing around with the finer points, we settled on option B from the second image. The airy, open feel of this composition provided a nice contrast to some of our other city locations that feel more cramped and urban.

Once that was settled, the artist took off towards the final image. CDS was great about keeping us posted on the various stages involved along the way. 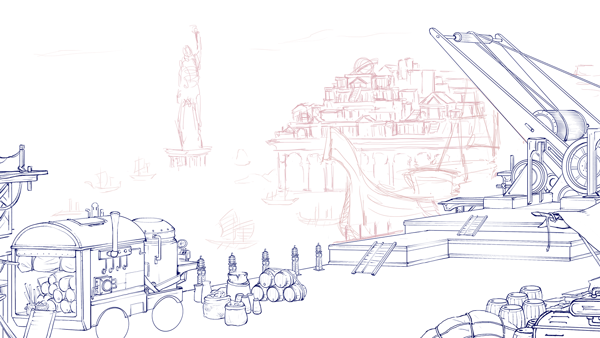 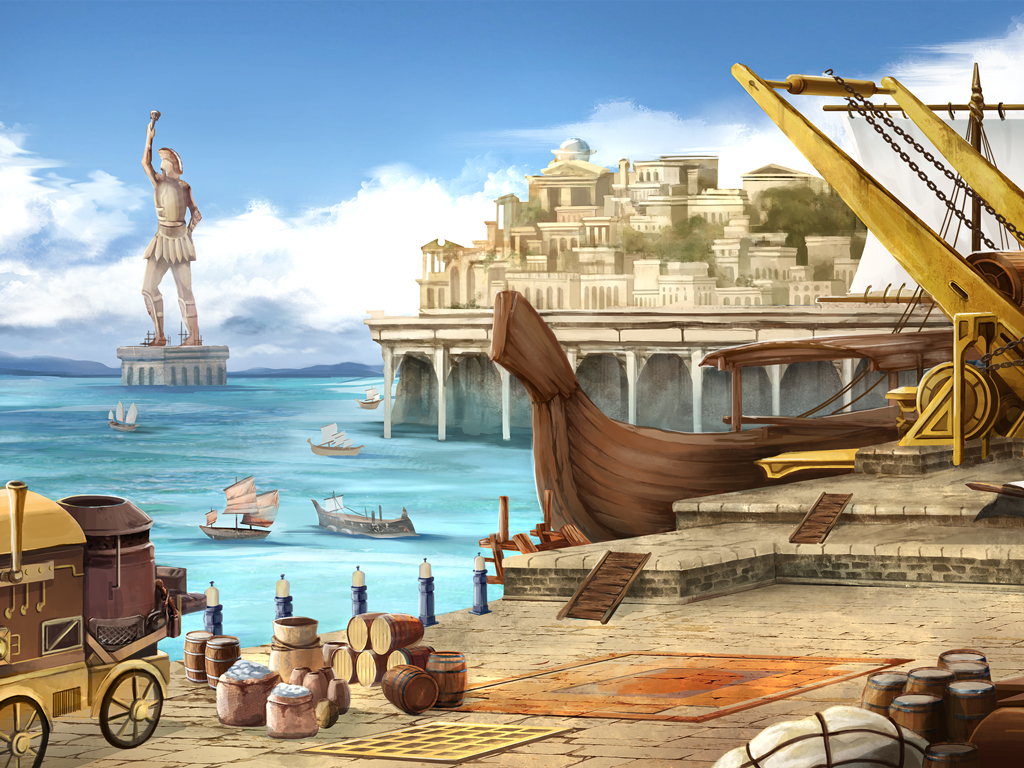 This is where things stood at the end of our trial run with CDS. They exhibited an incredible attentiveness when it came to the fine details, and their transparency throughout the process was fantastic.  We were quite happy with how the final image turned out, but unfortunately the scheduling just didn't work out when it came to a continued partnership.

Now, jump ahead several months with me. Daniel had been on board for a while and was turning out great work on our other locations. We decided that we wanted him to go back over Rhodes and ensure it matched the style of his other pieces. This mostly entailed intensifying the lighting and shadows to match his preference for more dynamic lighting. Flip back and forth between the two images to see the differences. 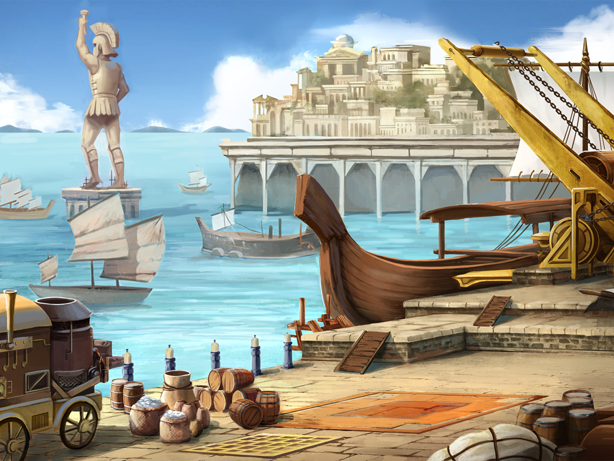 Notice anything else that's different?

The Colossus and the boats are huge now! Unfortunately, we lost the staggering height that was critical to the island's identity during the transformation, as Daniel had dragged in the Colossus and resized the boats in the harbor due to a miscommunication on our part.

Luckily, this worked to our favor in the end. With a quick change to the horizon, a few additional ship elevators, and some architectural duct tape to help hold up the docks, Daniel was able to make the sense of scale even more pronounced than before. 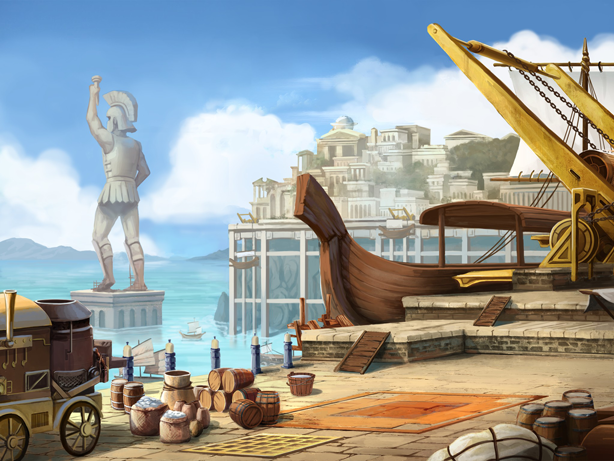 So there you have it: Rhodes. And if you happen to be in town, don't forget to ask Evagoras about the elevators' auto-load balancers!
Posted by Kurt at 7:05 AM