An unfortunate rule of game development is that it's hard to really nail down the tools that will be best to make your game before you've actually dived in and started making it. In this case, our original dialogue tool was built to very closely parallel the mechanics of the dialogue system. This was great when we were first figuring out how to tie different conversations and branches together. However, because this dialogue tool focused on lines as atomic entities, managing long conversations in it was difficult. (For example, it was impossible to view more than one line at a time.)

These difficulties made following a conversation's flow in our dialogue tool difficult, and our non-programming writer found the tool overly complicated and confusing. So we decided to experiment with a new tool, Thoth.

With Thoth, our focus was to make the tool behave as much like a word processor as possible. You can start a new conversation and just type away. It's only when you want to add a branch or alternative line that you need to start using the buttons on the side. Additionally, even when you are using branching, it's easy to set what branch of the conversation you want the tool to follow.

There's still more work to do, but here's the current version: 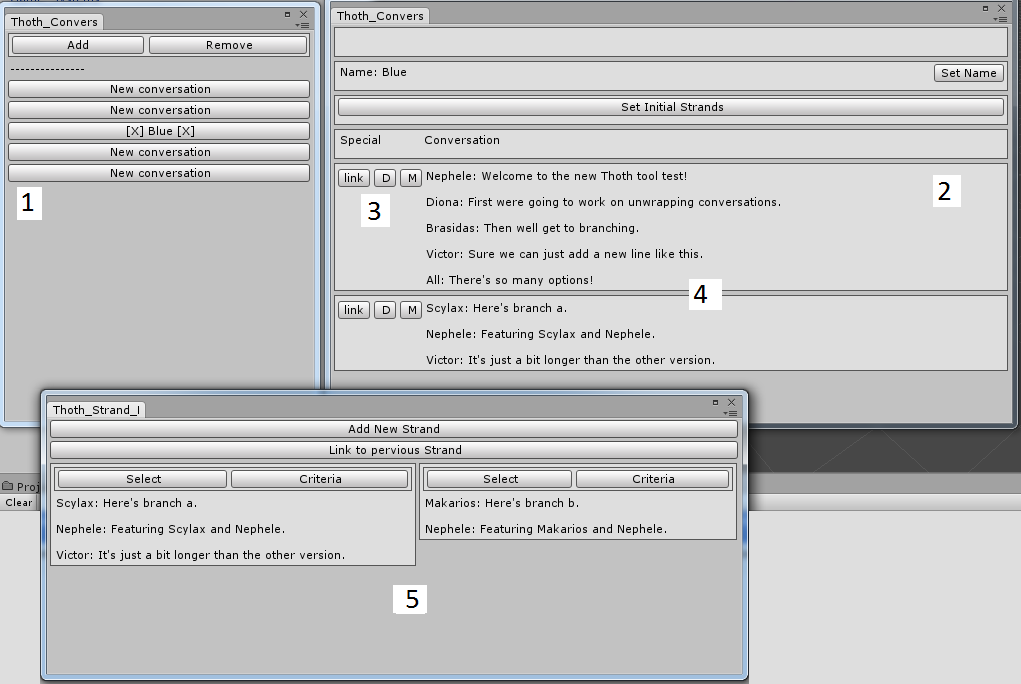 1. The user selects which conversation she wants to edit here.

2. The user types a conversation here and the field automatically expands as new lines are added.

4. This space denotes there was a branch choice between the two parts of the conversation.

5. This window allows you to select which of multiple branches to follow.
Posted by Victor Cepeda at 3:29 PM