So, it's been a while since we've shown off a new location, but I have a secret to share. Between my last post about Corinth and this post, we've finished nearly all of the location art! Two quick reimaginings of existing locations remain, and then we'll be 100% complete with the location backgrounds. Praise Zeus!

Exultations aside, Thebes is today's focus. Or at least, Hellenica's Thebes, completely transformed by its railroads. Here's our inspiration:

"Thebes has the ambition and determination of a nation that's been on the economic and political rise for over a decade. Their wholehearted embrace of technology is evident everywhere, from the mechanical design of its buildings to the great factories which have turned the city into the most important manufacturing center in Greece, as well as the primary railroad hub." 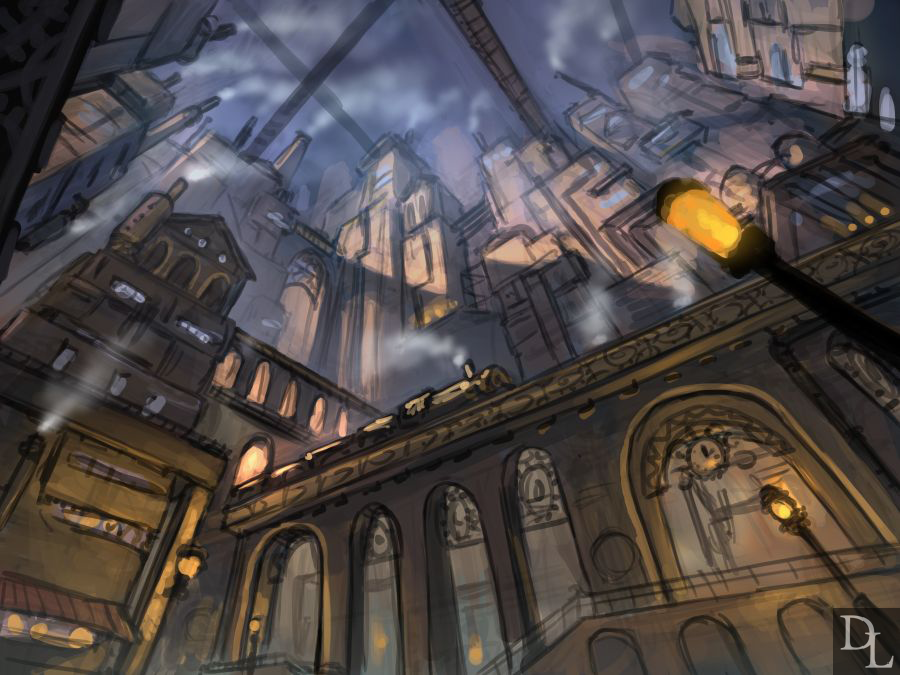 He definitely nailed the vibe we were hoping for, but we felt that overall, the scene was just a bit too modern for our game. Steampunk ancient Greece is a tricky setting, and we have to work hard to make sure our art doesn't stray too far out of line. 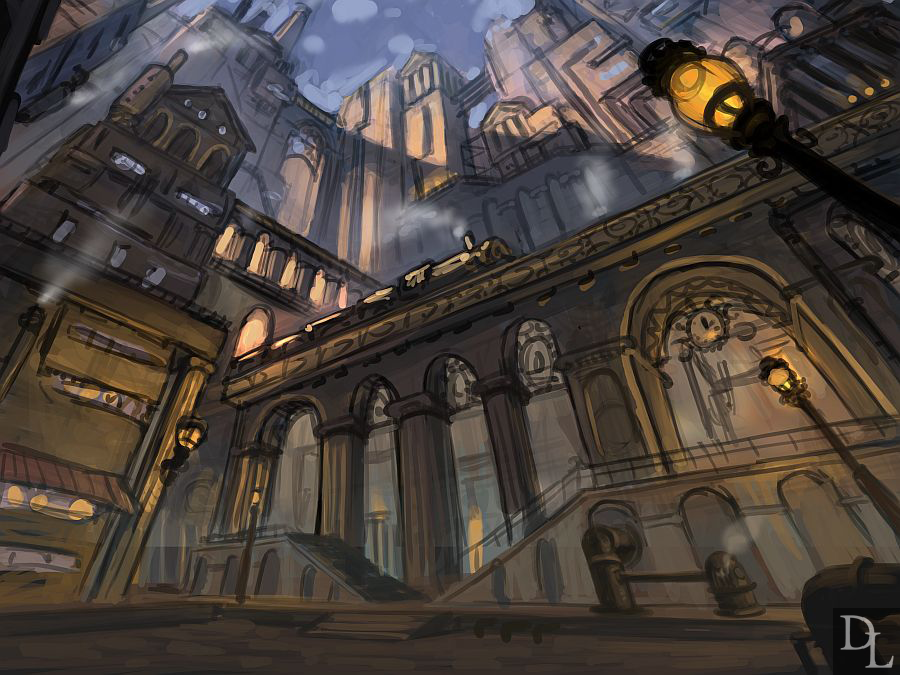 To address that issue, we brought the perspective down lower. Without modern construction materials, it would be impossible to build structures that tall. At this point, you can start to see some more traditionally Greek elements sneaking into the architecture, but it still felt a little too 19th century London. Onwards! 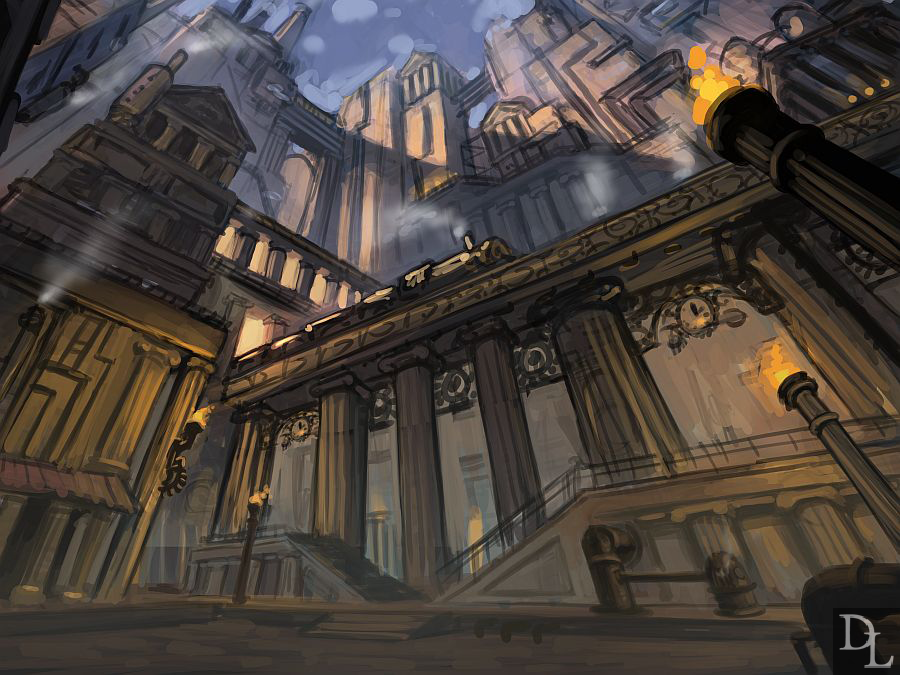 We nixed the windows, removed the arches, really pushed the columns, and traded out the gas lamps for torches. Overall, it felt much more Greek without sacrificing the vibe and the steampunk elements.

At this point, we were feeling pretty good about Thebes, so Daniel spent some time cleaning it up and working on the details. Here's the final version: 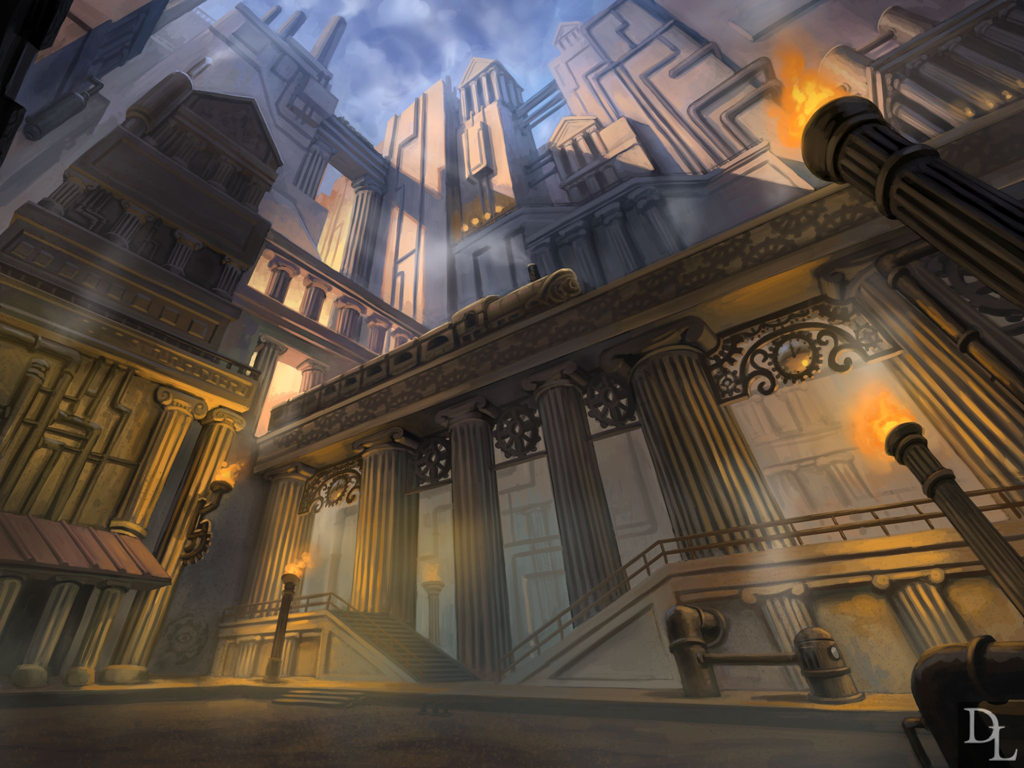 And that is Hellenica's version of steampunk ancient Thebes, railroad and manufacturing hub of the ancient Greek world.  The observant viewer might even find a clue about some of the other dealings that take place in Thebes. Let us know what your theories are in the comments!
Posted by Kurt at 8:43 PM